It is a hot, dusty day in early November.  Splashes of red, orange and pink bougainvillea line the road, like fireworks frozen against the vast blue sky.  Lady Stanley cemetery sprawls itself out as far as the eye can see: order has given way to expediency and every available space is taken.  Wreaths of fake flowers in garish colours spell out names; shiny foil ribbons flicker in the sunlight or wave limply in a stray wind. A minibus emblazoned with the words ‘Exodus Funeral Services’ bounces manically down a narrow road separating the Muslim part of the cemetery from the rest and, in the distance, a blue and white striped gazebo marks a current internment.

The war graves are relatively easy to find, being enclosed by a low wall and demarcated by neat white lines of headstones, standing straight and tall. The heat beats down on me as I read the inscriptions: Labourer, Cephas, Rhodesia Air Askari Corps, 15th December 1944; Sambadzayi, Buried 2 November 1942 and, of course, the unknown, A Soldier of the 1939-1945 War, Known Unto God.

﻿
Only one inscription includes a surname; otherwise, the dead are known only by their first names and rank.  Names of those buried elsewhere are recorded on a white marble wall that bears the message: Their Glory Shall Not be Blotted Out. This is the African Memorial to those lost in the Second World War.


The white servicemen are buried in the nearby Athlone cemetery, in a spot which is much more difficult to find.  The paths have obviously not been cleared for a long time and I have to stop my car to move branches and rusting metal flower pots.  But the area the war graves are in is well-kept.  There is some shade at least and a bench on which to sit in silent contemplation.


Here, the servicemen - and one woman - are identified by initials and surnames, lending their standing considerable more gravity.  Many of them were in the Royal Air Force and there are a number from the Royal Hellenic Air Force and one Canadian.  The headstones bear inscriptions from parents and wives and children. Those lost were sons, husbands and fathers.  Sometimes they were eldest sons, sometimes youngest sons, sometimes only children.  One in particular moves me: ‘Goodnight, Daddy.  Sleep well until we meet again.’ I think of all the years that have gone by.  The children who lost parents will be old now.  How long it has been to live with absence. 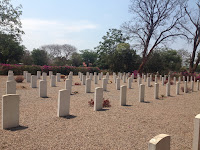 ‘The Lord Giveth and the Lord Taketh Away’ reads an inscription, but that is not true.  It is only people who take.  We take away life and dignity; we take away respect and identity.  We take it from some and we give it to others.  ‘His Will Be Done’ declares another inscription with angry finality and, another quotes the famous words by Laurence Binyon, ‘At the going down of the sun and in the morning we will remember them.’


But who, I wonder, does remember these soldiers and who does acknowledge the sacrifice they made.  Those who died and those few still alive are forgotten by the United Kingdom, on whose side they fought, and ignored by the current  Zimbabwean government , who wish to sever all ties with their former colonial power. Remembrance Day is no longer observed in Zimbabwe as the 11 November 1965 was the date Ian Smith chose to announce Rhodesia’s Unilateral Declaration of Independence. With Zimbabwe no longer in the Commonwealth, Rhodesia is not represented at the Cenotaph in London; a separate ceremony is held elsewhere.


Another verse of Binyon’s poem reads:


‘But where our desires are and our hopes profound,
Felt as a well-spring that is hidden from sight,
To the innermost heart of their own land they are known
As the stars are known to the Night;’


Sadly, most Zimbabweans are oblivious to the service given by Rhodesian soldiers of all races, and those who do know about it have consigned it to the bitter history of Empire, one best not spoken of.  However, there are moves from a few to get greater recognition for these people and help for those still alive. But time is running out.
Part Two of this article is to follow.