Out of Africa Lifestyle Magazine: An Interview with Bryony Rheam 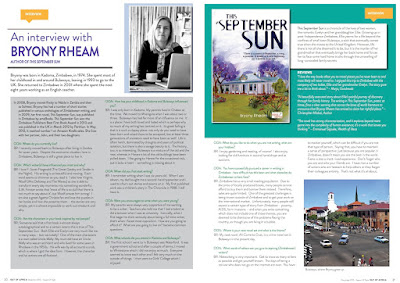 Bryony was born in Kadoma, Zimbabwe, in 1974. She spent most of her childhood in and around Bulawayo, leaving in 1993 to go to the UK. She returned to Zimbabwe in 2001 where she spent the next eight years working as an English teacher.

In 2008, Bryony moved firstly to Ndola in Zambia and then to Solwezi. Bryony has had a number of short stories published in various anthologies of Zimbabwean writing, and in 2009, her first novel, This September Sun, was published in Zimbabwe by amaBooks. This September Sun won the Zimbabwe Publishers Best First Book Award in 2010 and was published in the UK in March 2012 by Parthian. In May 2012, it reached number 1 on Amazon Kindle sales. She lives with her partner, John, and their two daughters.
OOA: Where do you currently live?
BR: I recently moved back to Bulawayo after living in Zambia for seven years. Despite the economic situation here in Zimbabwe, Bulawayo is still a great place to live in.
OOA: Which writer(s) have influenced you most and why?
BR: I love F. Scott Fitzgerald (The Great Gatsby and Tender is the Night). His writing is so beautiful and moving. Each word seems to shimmer as you read it. I also love Virginia Woolf (Mrs Dalloway and The Waves) as she is able to transform every day moments into something wonderful. E.M. Forster wrote that ‘most of life is so dull that there is not much to say about it’, but Woolf proves him wrong! I am also a great Agatha Christie fan and love the puzzles in her books and how she presents them – the stories are very simple, yet it is almost impossible to work out whodunit and why.
OOA: Are the characters in your book inspired by real people?
BR: Someone said that a first book is almost always autobiographical and to a certain extent this is true of This September Sun. Both Ellie and Evelyn are very much like me in many ways – but not totally! One of the main characters is a man called Uncle Wally. My mum did have an Uncle Wally who was an architect and who lived for some years in Rhodesia in the 1950s. His wife was by all accounts a snob, which is where I got the idea from. However, the character and his actions are all fictional.
OOA: How has your childhood in Kadoma and Bulawayo influenced you?
BR: I was only born in Kadoma. My parents lived in Chakari at the time. We moved to Mhangura when I was about two or three. Bulawayo has had far more of an influence on me. It is a place I have both loved and hated which is perhaps why so much of my writing has centred on it. Its great failing is that it is such a cliquey place: not only do you need to have been born and raised there to be accepted, but at least three generations of ancestors need to have been as well! Life is often harsh, dominated by droughts and years of political isolation, but there is also a savage beauty to it. The history, too, is so interesting. Bulawayo is a mixture of the old and the new, whereas in Harare a lot of the old buildings have been pulled down. I like going to Harare for the occasional visit, but it lacks a heart – something is missing about it.
OOA: When did you first start writing?
BR: I remember writing when I was six years old. When I was eleven, my dad bought me a second-hand typewriter and I used to churn out stories and poems on it. My first published work was a children’s story in The Chronicle in 1988. I still have it.
OOA: Were you encouraged to write when you were young?
BR: My parents were always very supportive of me wanting to be a writer. Teachers also told me that I had a talent as did a lecturer when I was at university. Ironically, when I first began to think seriously about being a full time writer, that’s when I faced most opposition. How are you going to afford it? What are you going to live on? became common questions.
OOA: What schools did you attend in Kadoma and Bulawayo?
BR: The first school I went to in Bulawayo was Waterford. It was a government school and after a couple of terms, I moved to Whitestone which I did not enjoy as much. Everyone seemed to know each other and I felt very much on the outside of things. I then went to Girls’ College which I enjoyed.
OOA: What do you like to do when you are not writing, what are your hobbies?
BR: I enjoy gardening and reading, of course! I also enjoy looking for old furniture in second hand shops and at auctions.

OOA: You have successfully pursued a career in writing in Zimbabwe - how difficult has this been and what obstacles do Zimbabwean writers face?

BR: Zimbabwe has a very small reading population. Due to the price of locally produced books, many people cannot afford to buy them and borrow them instead. Therefore, sales are quite limited. One of the greatest challenges is being known outside of Zimbabwe and to get your work on the international market. Unfortunately, many people still expect a certain type of story from Zimbabwe – poverty, AIDS, farm invasions – and when you write something which does not include one of these themes, you are deemed to be dismissive of the problems facing the country, as though you are living in a bubble.

OOA: Where is your next novel set and what is the theme?

BR: My next novel, All Come to Dust, is a crime novel set in Bulawayo in the present day.

OOA: What words of advice can you give to aspiring (Zimbabwean) writers?

BR: Networking is very important. Get to know as many writers as possible and get yourself known. The days of being a recluse who does not go on the internet are over. You have to market yourself, which can be difficult if you are not that type of person. Saying that, you have to maintain a sense of perspective: just because you are popular in Zimbabwe, doesn’t mean you are the best in the world. Fame is also a short-lived experience. Don’t forget who you are and who your friends are. I have met a number of writers who are hesitant to help others or they forget their colleagues entirely. That’s not what it’s all about.