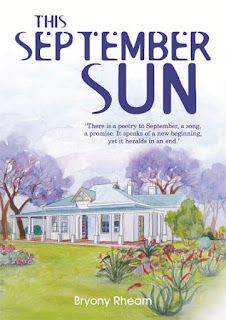 ‘On the 18th of April 1980, my grandfather burnt the British flag.’ So begins Bryony Rheam’s genre blending debut novel. Ellie, the main protagonist, is a young girl searching for identity in the self-absorbed, often neurotic postcolonial settler community in Zimbabwe. Her relationship with Evelyn, her grandmother whose cupboard has more skeletons than most, provides a back drop to a narrative that sweeps right from the Second World War through to the early 2000’s. Evelyn leaves her husband, Ellie’s grandfather, and strikes out on her own late in life, forming a new partnership with Miles, a man with his own difficult past, trying to eke a living on a small dust bowl outside of Bulawayo. Through Ellie’s observations we learn of the lives of the small closeted, white Zimbabwean society, dirty laundry is aired, nothing is spared, the illicit affairs, alcoholism, racism, misogyny, hopes, dreams and fears that linger long after the sun has set on the British Empire. Is there still a place for the white man in Africa and how to find a place on a changing continent is one of this novel’s central themes. Rheam masterfully crafts a novel that runs back and forth in time, using elements of the first person and epistolary to stitch a work that reads and feels more like a memoir than a conventional novel. This September Sun’s bold narrative successfully focuses on grand events, two wars, and the very small, minutiae of everyday life, four o’clock tea, cross generational relationships between grandmother and granddaughter in a changing world. Rheam’s Africa is not the Africa of the media - that is a continent reduced to nothing more than poverty and strife, it is a place where real people live with everyday worries and regular problems and the novel strikes an optimistic tone missing in most African Literature.
Tendai Huchu is the author of The Hairdresser of Harare

This September Sun is available throughout Zimbabwe and in selected outlets in South Africa and Zambia. Please contact amaBooks if you have problems finding it.

It is also available in the United Kingdom through our partner Parthian Books, and as a Kindle ebook.

In North America, it can be obtained through the African Books Collective.
Email Post
Labels: amaBooks Bryony Rheam Bulawayo Parthian This September Sun