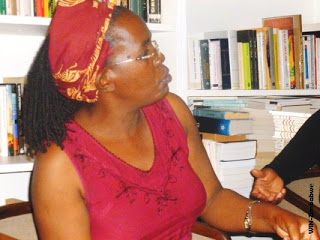 Full participation in any discussion of a work of creative writing is guaranteed by the participants' reading and understanding of the text for criticism. As this is possible where books are readily available for such purpose, it then calls for organizers of book clubs or discussions to device strategies that ensure the club members read the book before the day of the discussion.
At a discussion of the novel 'This September Sun' held on February 12 at the Spanish Embassy Book Club it was apparent that a few writers had read the novel and the rest were familiar with the novel through blurb and reviews.

However, the group discussion at the Embassy was thought-provoking as various questions were raised on story structure, characterization and themes, proving that a book is like a multi-faceted stone reflecting light in different shades. Different readers tend to have different views.
While the blurb describes the book as mainly about family secrets and history, writers at the discussion explored certain ‘overtones’ about the relationships of black and white characters in the novel.
Eresina Hwede, who led the discussion, said she was most struck by the loneliness of the characters, whom she said were but drifters, people who lack a sense of belonging and dissociate themselves from family. Each character that dies in the story, dies with regrets, she said.
On another note, she said comments made particularly about the black characters in the novel reflected no association of blacks and whites during the time the story happens.
“I wonder why few black characters that are in the novel appear briefly and they are portrayed as servants of white characters. Mr. Mpofu, who is not a servant but a lawyer, appears for a short moment towards the end of the story,” said Eresina.
Roger Stringer, a librarian and publishing consultant said as a white person, he saw the book from a completely different standpoint, arguing that the novel is not about blacks and white people's relationships but about a family. The novel is not a social story but a personal story about the relationship between a girl and her grandmother, he said.
"What strikes me in the story is the mystery, like a detective story, where one discovers what was unknown before," Roger added.
While Eresina and a few other writers maintained that although 'This September Sun' is known to be about family secrets, it exposes the political uncertainty of the historical period it covers. The burning of the Union Jack (soon after independence) which resulted in grandma sustaining a tea-pot-shaped scar which, the writers said, resembles the map of Zimbabwe, and various incidents in the story metaphorically carry political overtones.
However, Roger felt it would be unfair to pick out three pages out of a book of so many pages and give it such particular weight as the author only concentrated on family relationships.
Tinashe Mushakavanhu however saw Zimbabwean fiction in general as having little or no interaction at all between blacks and whites.
Beatrice Sithole, also present but had not read the book, said the fact that the book stirs such debate could explain why it is being studied at ‘A’ level as a literature set book in Zimbabwe. It having so many layers of meaning makes the novel worthwhile for critical study, she said.
The discussion was also graced by renowned writer Virginia Phiri and other writers. 'This September Sun' was written by Bryony Rheam and published in 2009 by AmaBooks in Bulawayo. It won Best First Book Prize at the 2010 Zimbabwe Book Publishers Association Awards.
Email Post
Labels: amaBooks Bryony Rheam Bulawayo Parthian This September Sun